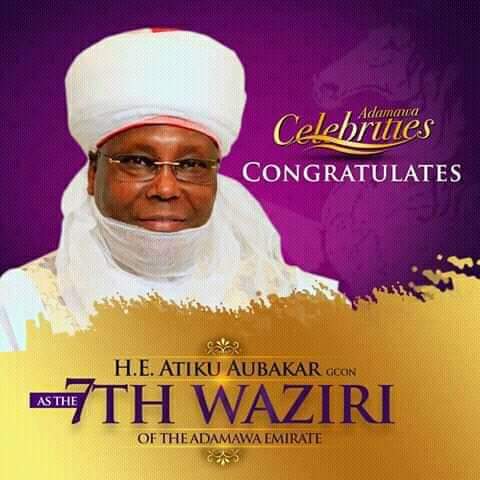 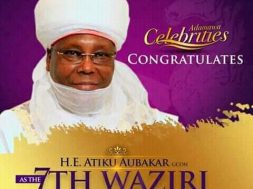 July 6, 2021
Royal
ATIKU  ABUBAKAR: THE 7th WAZIRI OF ADAMAWA…..
Royalty Magazine,
North East Team.
7th July 2021
In November 2018, Royalty magazine North East team bestowed with responsibility of reporting and packaging the Royalty related stories and updates brought an interesting story on the Turbaning of Alh. Atiku Abubakar, the Ex Vice President, Federal Republic of Nigeria, had these below as reported.
Former Vice President and 2019 PDP Presidential Candidate in the general Election was officially turbaned as the 7th Waziri of Adamawa Emirate. The position of Waziri in Adamawa is next to the Lamido, Muhammadu Barkindo Mustapha, in the hierarchy of the Emirate, which is also similar in all the Northern Emirates and Cheifdoms.
The Title invariable made the former Vice president next in the line to the Lamido of Adamawa. In his remarks, after the turbannig of Atiku 32 months ago, the Lamido said “Mr. Abubakar’s immense contributions to the development of Nigeria, particularly Adamawa State, is the reason he was honored with the title of Waziri”
According to the Lamido, Mr. Atiku has not only impacted on various sectors of the economy, he has equally contributed in unifying the people of Adamawa by providing good leadership and useful advice to the Emirate.
The position of Waziri is said not to be hereditary, but takes cognizance of people who are educated, honest and God fearing. Mr. Barkindo also called on other title Leaders to cooperate with the new Waziri while urging Mr. Atiku to continue to contribute to peace and unity of the people by carrying everyone along.
The President, Muhammadu Buhari who was represented by the FCT Minister, Musa Bello congratulated Mr. Abubakar for the position given him and wished him a successful reign. Other dignitaries that graced the occasion includes, Former President Olusegun Obasanjo, the then President of the Senate, Bukola Saraki, the then Speaker House of Representatives, Former Vice President, Namadi Sambo, Former and Present Governors, diplomats Ministers and Captain of Industries both within and outside the Country.
His Highness, the Lamido of Adamawa, Alh. Barkindo Mustapha PhD, and his council were not in any away regretted for chosen Alh. Atiku Abubakar as Waziri, an action considered unique and very unusual in Hausa Land in choosing those to deputise the Emirs. Not only in North, even across the Nigerian geopolitical zones, that is unique.
The choice of every Waziri, is widely dedicated to those people that are domesticated at home, at their localities, those that find it very easy and flexible in the overall of steering the affairs of every Emirate or Kingdom in the absence of their principals. Most of them are retired Government officials, prominent Islamic figures with vast experience, but few of them are from the Political arena or business.